A shrinking number of businesses, major corporations and governments still provide retirement security to workers via pensions. In some pension plans, workers can choose how to get their money – through a series of payments, in a lump sum or a combination of the two.

Why Trust Annuity.org
Why You Can Trust Annuity.org
Annuity.org has provided reliable, accurate financial information to consumers since 2013. We adhere to ethical journalism practices, including presenting honest, unbiased information that follows Associated Press style guidelines and reporting facts from reliable, attributed sources. Our objective is to deliver the most comprehensive explanation of annuities and financial literacy topics using plain, straightforward language.

Our Partnerships, Vision and Goals

We pride ourselves on partnering with professionals like those from Senior Market Sales (SMS) — a market leader with over 30 years of experience in the insurance industry — who offer personalized retirement solutions for consumers across the country. Our relationships with partners including SMS and Insuractive, the company’s consumer-facing branch, allow us to facilitate the sale of annuities and other retirement-oriented financial products to consumers who are looking to purchase safe and reliable solutions to fill gaps in their retirement income. We are compensated when we produce legitimate inquiries, and that compensation helps make Annuity.org an even stronger resource for our audience. We may also, at times, sell lead data to partners in our network in order to best connect consumers to the information they request. Readers are in no way obligated to use our partners’ services to access the free resources on Annuity.org.

Annuity.org carefully selects partners who share a common goal of educating consumers and helping them select the most appropriate product for their unique financial and lifestyle goals. Our network of advisors will never recommend products that are not right for the consumer, nor will Annuity.org. Additionally, Annuity.org operates independently of its partners and has complete editorial control over the information we publish.

Our vision is to provide users with the highest quality information possible about their financial options and empower them to make informed decisions based on their unique needs.

Pensions are an employment benefit and a way for a company to help workers finance their retirement. Pension plans date back to ancient Rome, when soldiers received pensions after years of service. Pensions became popular in the United States when President Franklin Roosevelt introduced the world’s largest defined benefit pension plan in 1935 with the Social Security Administration.

Employers who make monthly payments to former workers use pension funds that both the employer and employees paid into during the years the employee was working.

Pro Tip
In order to qualify for a pension, employees generally must have a minimum number of working years. The plans pay out benefits based on the recipient’s age, health, experience and company resources.

Since the early 2000s, the number of workplace pension programs has dwindled; many companies found it difficult to fund pensions over a long period of time while also pleasing shareholders who wanted more profits and fewer long-term liabilities.

Some private companies and unions still offer pensions as a benefit, as well. Private sector pensions hold more than $2.2 trillion in assets and cover around 44 million working Americans.

Some employers use their money to fund and control pensions. Others work with insurance companies to set up third-party annuities for employees, which provide security and relieve the company of the long-term financial obligation. Companies that use pension annuities include Verizon, General Motors, Ford and Heinz.

Pension benefits vary widely, often based on the type of employer, industry and location. According to data from the Pension Rights Center, only 31% of U.S. seniors receive retirement income from a pension.

Investment returns on pension funds have trended downward since the start of the century — from more than 12% in 2000 to about 7% in 2021. The decline was blamed on a shift in fund investments from bonds to the more volatile stocks, according to a 2020 issue brief from the Pew Foundation.

Along with Social Security benefits, retirees rely on pensions and annuities — both tax-deferred benefits — to afford living expenses once they stop working.

Pro Tip
Employers often set up pensions to be paid in a series of installments.

Similar to a life or longevity annuity, pension payouts begin close to or at retirement and usually last until the recipient’s death. In some cases, the worker may name their spouse as a beneficiary of the pension in the case of their death.

The Secure Act has made it easier for employers to allow annuity options in 401(k) plans. 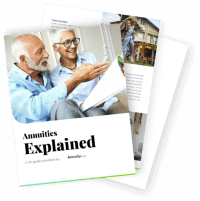 Get Your Free Guide to Annuities
Learn from the experts and get our 101-level guide, Annuities Explained, delivered to your inbox for free.
DOWNLOAD

The main difference between defined benefit (DB) plans and defined contribution (DC) plans are where the money comes from.

In a defined benefit plan, the employer contributes the money to the pension, which the employee receives on retiring. DBs are based on a fixed sum and are guaranteed to pay out to employees, regardless of how the business is performing financially. This is because the Pension Benefit Guarantee Corporation — a federal agency created following the Employee Retirement Income Security Act — helps protect pension funds.

In addition, the Employee Retirement Income Security Act of 1974 mandates qualified pre-retirement survivor annuity (QPSA) as protection to the spouse of a pension plan participant if the participant dies before he or she retires.

Companies often have difficulty maintaining DB plans because they carry the financial burden. If inflation occurs, the stock market drops or the company revenue is declining, they may have to pay for the pension with out-of-pocket funds.

Pro Tip
In 2014, DC assets increased by 12.8 percent, compared to DB assets that increased 6.4 percent, according to the nonprofit Pensions and Investments.

As a result, many employers are now choosing DC plans because they do not require as much of a financial investment from the company. In these plans, such as IRAs and 401(k)s, the employee is responsible for adding money to the account. In some cases, employers may offer a small matching program to incentivize employees to save for retirement. IRA and 401(k) plans are advantageous because they allow employees to earn tax-deferred growth on their savings.

Pension owners often hit a crossroads when they retire. Somewhere between ages 55 and 65, they’ll have to decide whether they want a lump sum payout, a series of payments or a combination of the two. Most companies default to a series of pension payments, requiring the employee to opt out of the plan before retirement if they want to receive a lump sum. Those who elect a lump sum may receive a check for the full amount or roll the total into an eligible tax-free or tax-deferred plan, such as an IRA.

By law, a pension plan must provide a lifetime annuity option that pays benefits until you die or until a surviving beneficiary passes away. Your plan may offer a lump sum option in lieu of, or in addition to, a life annuity.

Some questions to consider while deciding how to accept the pension include:

Is my pension guaranteed?

Payments
Yes, on a regular basis through the end of your life.
Lump Sum
Yes, only once.

Is my pension protected from inflation?

Is my pension protected from stock market changes?

Do I invest the pension?

Payments
No, the employer or insurance agency does this.
Lump Sum
Yes, if you choose to.

Can my spouse or children inherit my pension?

Payments
Yes, if you have a “joint and survivor” pension annuity.
Lump Sum
Yes, if your beneficiary makes a claim with your employer to receive the benefits.

Teachers of all grades, from kindergarten to law school and medical school, are a large group of American working professionals who usually are eligible to collect pensions after they retire. This mostly affects public school teachers who draw years of income through school systems that participate in county or state retirement systems. These pensions differ from state to state but are generally referred to as Public Employee Retirement Systems and Teachers Retirement Systems.

Some states automatically withhold a portion of a teacher’s paycheck and then contribute another portion to a retirement fund. In other states, teachers must work at least 10 years before they’re allowed to allocate pre-tax dollars to retirement plans. Teachers, school administrators, county and state admin, and executive staffers who work 25 to 30 years in a public school system gain the greatest benefit from these systems, which tend to reward same-school and same-system tenure.

This is especially true for athletic coaches, some of whom tend to migrate from school to school and state to state over a long career. In some cases, the stringent requirements for attaining full pension benefits make private sector jobs more appealing. However, private-sector teaching jobs are more likely not to have DB pension plans. Instead, they offer DC pension options such as IRAs or 401(k)s.

While critics worry about the long-term sustainability of some state education pension systems, right now these payments are still a guaranteed benefit for educators. Teachers needing money from their pension savings can contact pension purchasers and sell payments in exchange for a cash advance.

Those minimum requirements include at least 90 days of active duty during a wartime period (WWI, WWII, Korean War, Vietnam War or the Gulf War) or at least 24 months if you entered active duty after Sept. 7, 1980.

Applicants also must be:

Also available to families of veterans is the Survivors Pension. This program is available for low-income, unmarried surviving spouses or unmarried children of deceased veterans. Veterans and survivors with additional needs, who require assistance or must remain at home, can apply for supplemental income such as Aid & Attendance (AA) and Housebound plans.

Pension recipients may be able to find buyers offering a lump sum in exchange for future payments, but the transfer is not as simple as selling single premium annuities or structured settlements.

For example, federal law prohibits assigning of military and civil service pensions, and the IRS code prohibits the sale of some private pensions. Both the Securities and Exchange Commission and the Financial Industry Regulatory Authority have alerted pensioners to be wary about accepting cash buyouts.

However, a select amount of funding companies will purchase pension payments in exchange for a lump sum. Companies that buy pensions refer to the practice as factoring or setting up mirrored pensions, pension income programs, pension advance, pension loans or secondary-market annuities.

If you are interested in learning more about buying or selling annuities, call us at 877-918-7024